Meet David Byrd and listen to him share choice anecdotes from his life. 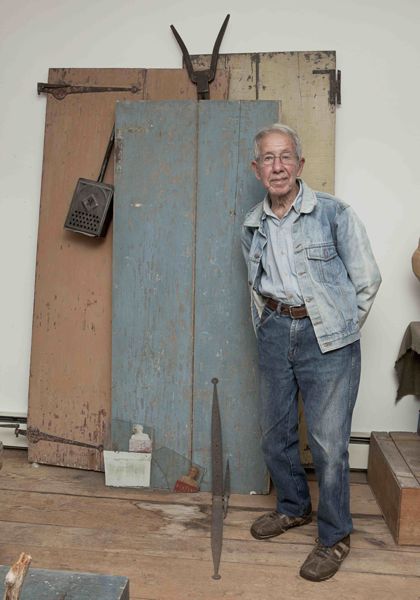 David Byrd was born in Springfield, Illinois, in 1926. His father, who suffered from mental illness, left the family when David was a young child. When David was twelve, his mother was forced by economic hardship to abandon him and his five siblings to foster homes. During the next four years, the children lived in three foster homes. A number of David’s paintings document this period of upheaval in his life.

In 1942, David’s mother gathered her children back to her. Working as a ticket seller at a movie theater in Brooklyn, New York, she could barely support them. David had shown artistic ability from an early age, but she was forever worried about money and pressured him to find suitable employment rather than pursue his artistic side.

At seventeen, he joined the Merchant Marines and traveled through Europe, the Mediterranean and Asia before being drafted into the U.S. Army as an artillerist. During this time—World War II—he filled sketchbooks with maritime-themed drawings, and portraits of his fellow sailors and officers.

After the war he studied briefly, through the G. I. Bill, at the Dauphin School of Art in Philadelphia. He continued his studies for two years at the Ozenfant School of Fine Arts on the Lower East Side in New York City. (Amédée Ozenfant was a Parisian painter, influenced by Paul Signac and Le Corbusier, and immigrated to the U.S. in 1938.)  Though David did not become a disciple of Ozenfant, one can sense his formality in both composition and sophisticated color relationships. Ozenfant was the most influential mentor in his life.

Throughout the 1950s, David lived in various parts of New York State working odd jobs, mostly low-status positions that allowed him time to paint. He was a deliveryman, janitor, liquor store clerk, movie house usher and, on Coney Island, bartender at a resort. Many of his genre-scene paintings came from this period of listlessness. In 1958, David took a job as an orderly in the psychiatric ward at the Veterans Administration Medical Hospital in Montrose, New York. For the next 30 years, he worked with doctors and nurses in care of patients whose damage resulted from World War II, the Korean War and the Vietnam War. This experience provided him with his defining body of paintings, which related to the patients and their individual behaviors, general routines and distinct personalities. He also painted scenes from his daily commute—views of bridges, waterways, mountains and the regional landmarks of filling stations, cafes and shopping centers.

In 1967, David married Shirley Silverman, a nurse at the V.A. They had a tumultuous relationship that ended in divorce ten years later.

In 1988, at age 62, David retired from the hospital. He purchased 11 acres in Sidney Center, New York, a small hamlet in the Catskills. For four years, he lived in a hunter’s shack while building the stone foundation for his home. An avid scavenger, he salvaged many of his home’s architectural details from abandoned structures. He was also an active bottle collector, attending auctions and shows during this time.

By 1994, with his house more or less complete, David devoted himself full time to painting—largely from memory—the people, places and situations from his past. He also began a series of wood sculptures, some combining found objects, some composed of large wood blocks carved into life-size figures.

Although David was prolific, he never exhibited his work and rarely showed it to anyone. His light filled home in Sidney Center contained almost every work of art he ever created. David had great difficulty forming lasting relationships. Late in life he became reclusive and lived a largely invisible life.

A chance meeting with a neighbor in the fall of 2012 led to David’s first professional exhibition seven months later. He was 87 years old. David Byrd – Introduction: A Life of Observation at the Greg Kucera Gallery in Seattle, Washington, featured 85 paintings, three sculptures and numerous drawings. By the end of the exhibition most of the work had sold. Finally David received the recognition that had eluded him all his life.

Just days before the Seattle show opened, David was diagnosed with advanced lung cancer. Despite failing health, he was able to take his first airplane ride and attend the opening. His gallery talk was one of the best attended in Kucera’s history.

On May 30th, 2013, David Byrd died surrounded by friends at the New York Veterans Home in Oxford, not far from his home in Sidney Center.